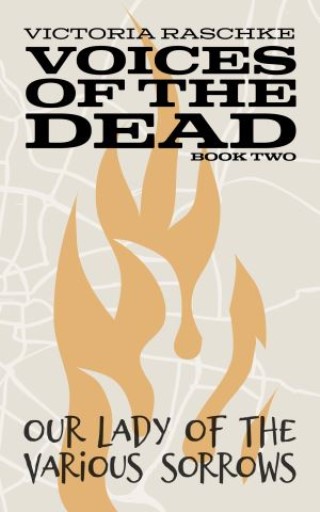 Our Lady of the Various Sorrows

Voices of the Dead: Book Two

Jo Wiley can talk to the dead. As fascinating as that may be, she would much rather go back to her old life of slinging tea and making fancy sandwiches. A month in a secluded farmhouse in the Slovenian Alps is exactly what she needs to hide out from both her personal demons and the dead who haunt her in Ljubljana. What she gets is a secretive local ghost and a visit from an ex-lover who is nothing but bad news—bad news Jo is going to have to deal with immediately. Her appearance as a new Voice of the Dead, has reignited an old war between ancient gods with human faces and humans who wish to be as powerful as the gods. Jo and her son are right on the battle lines and who their allies are has become very unclear. Jo soon realizes her role in this war is more determined than she’d ever imagined and that she may have to make the ultimate sacrifice to save those she loves most.

Victoria Raschke: Victoria Raschke writes books that start with questions like "what if you didn't find out you were the chosen one until you were in your forties?" When she isn't holed up in her favorite coffee house to write, she can be found at the nearest farmers' market checking out the weird vegetables or at her home where she lives with a changing number of cats and her family who supports both her writing and her culinary experimentation - for the most part.